Welcome back to Beck’s monthly picks!

Warnings: death, loss of a loved one

This series is short and sweet. The manga centers around the friendship of a Mythical Beast Investigator, a bunny (previously the king of darkness), and a bat. The three travel together to record their findings on different beasts and then publish those findings. The goal is to make a world with more understanding for both parties so that they can live in harmony.

This story has multiple stories intertwined. There are the stories that Tiến reads to his mom, his mother’s past, and Tiến’s own story. To keep track of this, the book uses a color coded system that is easy to follow. Through Tiến’s story, the book touches upon topics such as immigration, coming out, and language barriers. Tiến’s mom tells her immigration story through flashbacks of the events. The fairy tales that are read do take a dark turn, but you may like these retellings. My personal favorite is the retelling of Cinderella as a mermaid in the beginning of the novel.

Bleach follows Ichigo, a teenager that can see and communicate with spirits. Because of his power, he meets Rukia, a soul reaper. Rukia’s job is to help spirits pass on. She also fights spirits that have lost themselves and become evil. No one is supposed to see her, yet Ichigo can. The two end up on an unusual journey together, as a result.

This month I couldn’t stop reading this series. I read books 1-29! These are definitely books that you can’t put down. I know 74 seems like a lot, but remember it’s a manga so there are pictures. Also, you never have to finish a series if you don’t want to. The tv version was never finished so even if you decide to watch instead you may want to pick up the last few books to see the ending. So give this a chance! 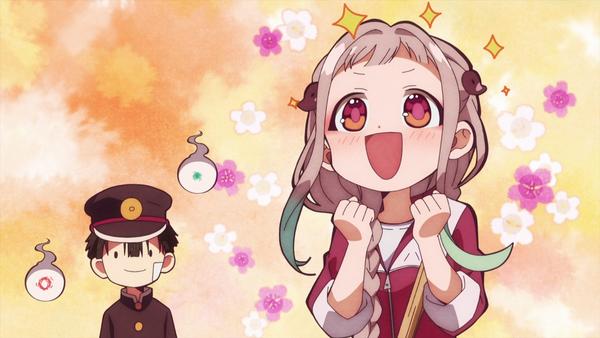 Toilet Bound Hanako-kun follows the ghost of a school and student that makes a regretful wish. In exchange for a boy to notice her, she tries to, and successfully, finds a ghost that is rumored to haunt the girl’s bathroom. They strike a deal so that Yashiro’s crush will notice her. When she realizes that she doesn’t actually like him, it’s too late. Thus, she is stuck with Hanako.

This series absolutely wrecked me and it’s not fair. Why the hell did an anime about a bathroom ghost make me cry?

Well, for starters, the truth about Hanako’s past is devastating and the way he fears his brother is awful.

This show really has such loveable characters and I’m upset that there isn’t a second season yet.

Warnings: incest, violence (but no blood)

Cardcaptor Sakura is the tale of a magical 4th grader who has to collect magical cards. Now on the loose, the creatures from these cards are running wild. It’s similar to the Goosebumps movie. The Goosebumps movie is centered around book characters that have come to life and need to be put back in the book. Sakura’s mission is to also bring the characters back by changing them into cards.

This show has an overall nice tone. It is, after all, marketed as a children’s magical girl anime. However, there are some issues. One being Sakura’s classmate. Meiling Li is in love with her cousin. Thankfully, he doesn’t love her back and is disgusted by this behavior. I think Meiling was created to be comic relief. It seems she was supposed to take on the whole “I love someone that doesn’t love me back” trope. But the writer could have made her in love with a classmate instead of her cousin. Honestly, she comes off as more cringy than funny. Unfortunately, when it comes to older shows there tend to be some awful parts. This series is no exception.

But I love the animation, learning about the different cards, Sakura’s best friend, and the card’s guardian. Sakura’s BFF, Tomoyo, is extremely wealthy. Because of this she is often accompanied by bodyguards. When they make an appearance, the guards are quite nice and are truly looking out for Tomoyo. Tomoyo also loves fashion and recording videos. Since Tomoyo has so many funds, she is able to design dresses for Sakura and make them a reality. Every quest Sakura goes on includes a new outfit designed by Tomoyo and Tomoyo’s video camera. The designer loves to film Sakura’s adventures. She’s kind of like a vlogging YouTuber.

The card’s guardian, Kero, is also loveable. He loves video games and sweets! Often while Sakura is at school he plays fighting games. Since he isn’t protecting all the cards, he doesn’t have his true form. Instead, Kero is a tiny creature with wings.

I made it to episode 46. Without spoiling, there is a huge plot twist around this time. I was actually shocked because I didn’t predict fully what would happen so it took me by surprise.

This show is honestly a nice thing to have in the background. I wanted to get lots of cleaning done over break so I breezed through episodes while sorting. I managed to clean three rooms in a few days, getting rid of lots of clutter. Having Sakura made the work fun!